Flooding has forced the partial closure of Fletcher Ave. in Waterloo.

City officials were planning to shut the flood gates along Black Hawk Creek at 10 AM Wednesday, due to rising water and possible ice jams. Fletcher Ave. was being blocked off between University Ave. and U.S. Highway 63 (Sergeant Road), where the street passes through Hope Martin Park.

The National Weather Service on Wednesday issued a flood Warning for Black Hawk Creek at Hudson, or from the Black Hawk-Grundy County line to the Cedar River in Waterloo. The warning runs through Sunday morning. Moderate flooding is expected.

At 10:45 AM Wednesday, Black Hawk Creek's water level was at 8.2 feet or 5.8 feet below the 14-foot flood stage. No flooding was occurring, but forecasters were predicting the creek to rise to 16-feet by Friday afternoon before cresting.

The combination of rain and snow melt has increased the risk of flooding across Iowa. A large portion of the state is currently under a flood watch.

The National Weather Service was expecting a powerful storm system to move through the region on Wednesday. Forecasters expected the system to bring higher temperatures and potentially heavy rain.

Black Hawk Creek is a tributary of the Cedar River, which is expected to rise to 16.3 feet by early Sunday morning — more than 4 feet above its 12-foot flood stage. At 9 AM Wednesday, the river stage was 6.25 feet. 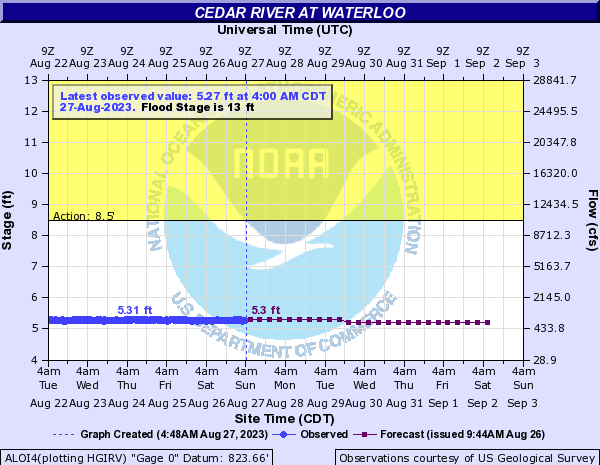 According to city officials, the Fletcher Ave. flood gates will be re-opened once water levels recede and safe travel can once again be guaranteed. Motorists should seek alternate routes